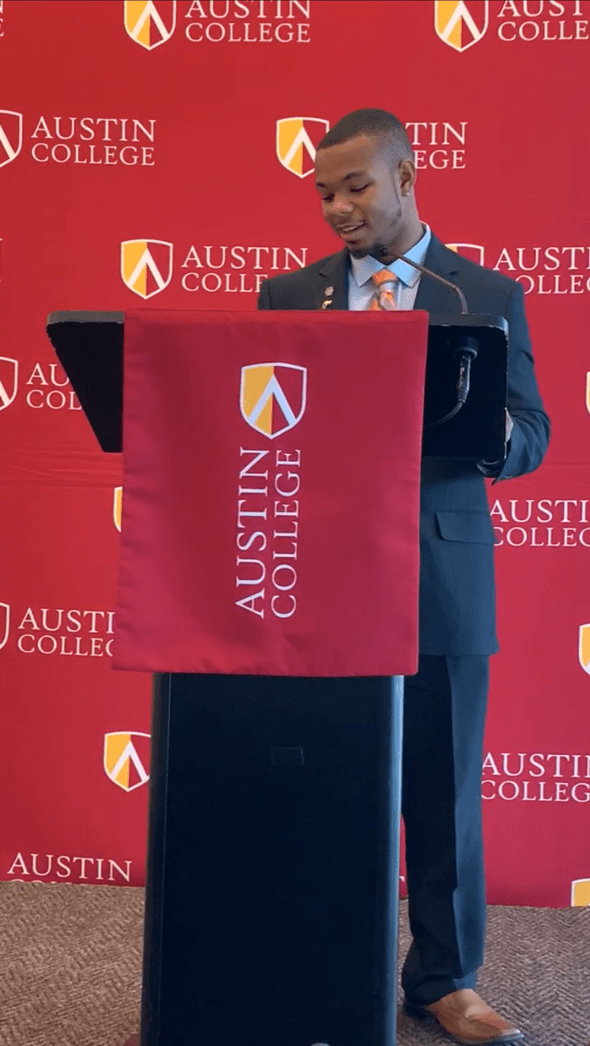 In 2015, Reginald (Reggie) Evans wrote in an application essay “to be a Hebron Hawk means that you are a disciplined, determined, self-motivated young man part of a brotherhood designed to be victorious.”

Six years later, he continues to be the embodiment of that which he once wrote, taking every challenge life presents him and turning it into an opportunity to make his dreams come true.

After graduating from Hebron High School and being awarded the Hebron HS Football Booster Club Scholarship, Evans attended Austin College in Sherman, TX. Noticing an evident divide between students who only focused on academics and the students who went all in to the college experience by joining student organizations and athletics, Evans’ schedule quickly filled up as he dived into student activities.

He joined the Tri Gamma fraternity and also became a little brother to the Zeta Chi Omega sorority, becoming heavily involved with both organizations and eventually took on the leadership role as President of his fraternity. At the same time, Evans was also on the Austin College football team and the team captain his senior year.

“I loved it. It was one of the greatest experiences I’ve had, being able to go there and really get engaged there,” says Evans.

As involved as he was with student life and organizations, it almost pales in comparison to the dedication he put into his academics. Double majoring in both Sports Science and Psychology, Evans worked with staff and faculty to create a new and custom academic program that would provide him with the necessary pre-requisites that he would need to apply for graduate school and become a Physical Therapist.

“I got to my senior year where I decided, okay I could apply now and spend a lot of money on applications and possibly maybe get in somewhere. Or I can take this year to truly work on my application, take the GRE once or twice or however many times I needed,” says Evans.

He decided on a gap year between graduation and grad school so that he could dedicate time to his application, retake a few classes that he believed he could improve in, and begin gaining observation hours at his new position as a PT Technician at Peak Physical Therapy. Evans made the most of his gap year, happy with his job, his improved grades, and GRE scores. After applying to a few PT programs and juggling his choices, Evans landed on Oklahoma City University where he is playing an integral role in their inaugural PT program class.

“So I’m the first president of OCU’s DPT program, which is exciting in some ways but it has definitely put more on my plate. I’m happy to take the responsibility, it was a class vote. I just found out I get to build a Constitution from scratch so that will be fun. But fast forward to now, I’m loving school. It is not easy at all and I think all grad students would agree with that – this is not undergrad,” says Evans, now in his third semester of grad school.

“You do not have a lot of that time that you used to have. But it’s also a completely different type of environment. It is crazy the type of energy people bring of wanting to get in here and learn and progress in life. The questions people ask – I’m just like that is amazing that you are thinking that way. I feel like I’m part of that. I’ve seen people look at me crazy like – man, I wasn’t even thinking about that! It’s so much of us feeding off of each other because this is a professional program, we’re all trying to get our doctorate and move on and do great things. They’re definitely setting us up to do that.”

Not shy to leadership roles at all, Evans is also the liaison between his school and the American Physical Therapy Association as well as joining the Board of Oklahoma’s Physical Therapy Social Club. In December of 2022, Evans will graduate with his doctoral and move onto to practicing and deciding on specialization.

“By 2025, I want to be a well-functioning, well-known PT, getting a client base, getting out there and perfecting my craft. I do plan on coming back to work in Texas and really just doing what I love doing – helping heal people and get them back to whatever they want to be doing and improving people’s quality of life. That’s all I can really hope for,” says Evans.

The Lasting Impact of Hebron Football

Reminiscing on his high school days, Evans is pleasantly surprised to realize that much of his dedication and character was strongly fostered by his days in the Hebron High School football program.

“Between Hebron and Austin College, I’ve probably recited things that I heard Coaches say over the years cause I know those are things that motivated me and have pushed me. I actually thought about something Coach Brazil said probably six or seven years ago and I think about it on a weekly basis now. One day he said to us ‘Coaches believe in coaches, players believe in players, players believe in coaches, coaches believe in players.’ I’m like, man, that applies to everything! If I’m at work, it’s managers and employees. If I’m at school, it’s faculty and classmates,” says Evans. “So you are fighting not only for yourself but for everyone around you. There’s way more than one guy at the field at one time and it’s like that in everything else you do. You didn’t realize at that point how much that was going to apply. I got a lot from that when I think back on it.”

Finding Support from Your Local Community

Reggie Evans is the epitome of a self-starter, possessing the courage and will to follow through with his ambitions and goals. However, there was something special that inspired him when he received his LEF scholarship many years ago that he hopes young students continue to feel today.

“A lot of people are capable of so much but they just don’t have anyone in their corner saying that they can do that. You’ve got people that have the potential to be great but either they don’t have the funds for it or they don’t have the support that they need. That’s one thing that I found was so powerful, of just having organizations, people, individuals, friends, family, anyone that supports you in any way to encourage you to go be great! We believe in you, we’re proud of you. We think you have the potential to do great things and we’re willing to help you achieve those goals and those dreams. I feel like that’s what I got when I received the scholarship. It was a little extra pump in there of not only do I have my own ambitions and goals and dreams but I have people in my corner that are supporting me and telling me ‘hey, this organization believes in you’,” says Evans.

The Lewisville ISD Education Foundation is honored to be a part of Evans’ support system as he continues on his journey to his Doctorate degree and future Physical Therapy career. Hawk Pride Never Dies!

“Any help you can give definitely makes an impact – more than the donor or receiver realizes at the moment.” – Reggie Evans, Class of 2015